IU (International Unit):  is an internationally accepted unit used for the measurement of drugs and vitamins. This type of measure is used for the fat-soluble vitamins (such as vitamins A, D and E) and certain hormones, enzymes, and biologicals (such as vaccines).

The definition of an IU is generally arbitrary. Nonetheless, most IUs are quite handy and helpful in use as a means of standardizing measures. To define the IU for a substance, an international collaborative study is organized by the WHO Expert Committee on Biological Standardization1 using various assay systems in several laboratories. The main goal of the study is to reach a consensus regarding methods of analysis and the approach to standardization so that results can be compared.

EU (Endotoxin Unit): is a unit which indicates endotoxicity. The FDA initially defined the EU as the endotoxin activity of 0.2 ng of Reference Endotoxin Standard, EC-2 or 5 EU/ng. To convert the current FDA RSE, EC-6 from EU’s into ng, the conversion is 10 EU/ng. Depending on the source of the endotoxin, the conversion from endotoxin units to nanograms will vary. Previous versions of the Bacterial Endotoxin Test2 stated a suitable CSE has potency between 2 and 50 EU/ng.

FTU (Formazin Turbidity Unit): is the most widely used measurement unit to measure turbidity. Turbidiity is cloudiness or haziness of a fluid caused by large numbers of individual particles that are generally invisible to the naked eye, similar to smoke in air. The measurement of turbidity is a key test of water quality. ISO (International Organization for Standardization) refers to its units as FNU (Formazin Nephelometric Units).

U (Enzyme Unit): is a unit for the amount of a particular enzyme. One U3 is defined as the amount of the enzyme that produces a certain amount of enzymatic activity, that is, the amount that catalyzes the conversion of 1 micro mole of substrate per minute. The conditions also have to be specified: one usually takes a temperature of 25°C and the pH value and substrate concentration that yield the maximal substrate conversion rate.

The enzyme unit was adopted by the International Union of Biochemistry in 1964. Since the minute is not an SI unit, the enzyme unit is discouraged in favour of the katal, the unit recommended by the General Conference on Weights and Measures in 1978 and officially adopted in 1999. One katal is the amount of enzyme that converts 1 mole of substrate per second, so

The enzyme unit should not be confused with the International Unit (IU) see above, an unrelated measure of biologically active substances. 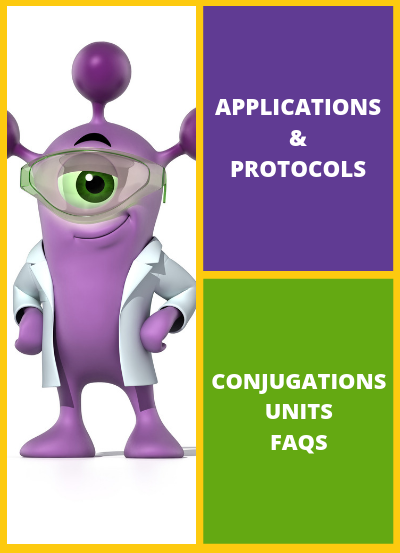 Scientific Support
We use cookies to provide you with a better service. Carry on browsing if you're happy with this, or find out how to manage cookies