Recombinant Rat Fibroblast Growth Factor-18. Rat FGF-18 is encoded by the FGF18 gene in rats. By phylogenetic analysis and gene location analysis, FGF-18 is divided into FGF-8 subfamily which has three members FGF-8, FGF-17 and FGF-18. Using FGF knockout mice model, the numbers of this subfamily were testified that have crucial roles of in embryo development. FGF-18-/- mice have decreased expression of osteogenic markers and delayed long-bone ossification. FGF-18 also has significant roles in lung development and has an anabolic effect on cartilage formation. Additionally, it has been shown in vitro that this protein is able to induce neurite outgrowth in PC12 cells. Rat FGF-18 shares 98% amino acid sequence identity with human. 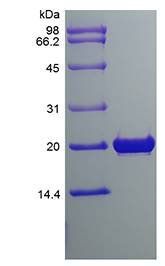 SDS-PAGE analysis of Rat FGF-18 protein
Reviews
Reviews
Write Your Own Review
Compare Products
Compare
Clear All
You have no items to compare. 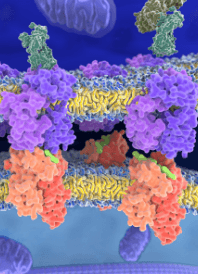