Recombinant Murine Betacellulin. Betacellulin (BTC) encoded by the BTC gene located on the chromosome 4, is a member of the EGF family that also includes EGF, TGF-alpha, Amphiregulin, HB-EGF, Epiregulin, Tomoregulin and the Neuregulins. BTC is expressed in most tissues including kidney, uterus, liver and pancreas. It is also present in body fluids, including serum, milk, and colostrum. Mouse BTC is expressed as a 178-amino acid precursor and the amino acid sequence of the mature form is 80% identical with human BTC. Both human and mouse BTC exhibit significant overall similarity with other members of the EGF family. Recombinant murine Betacellulin is a heparin binding protein containing 80 amino acids residues. 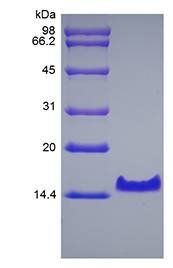 SDS-PAGE analysis of Murine Betacellulin protein
Reviews
Reviews
Write Your Own Review
Compare Products
Compare
Clear All
You have no items to compare.