Autoimmune diseases are conditions where the immune system attacks itself, mistaking its cells and proteins for foreign invaders. Susceptibility to certain autoimmune diseases, such as multiple sclerosis (MS) and systemic lupus erythematosus (SLE), are potentially inheritable. Environmental factors like infectious diseases, parasites, chemical agents, and even some drugs have been linked to autoimmune disease development. In some cases, women have also been shown to be more susceptible to pathological autoimmunity than men.

How do autoimmune diseases develop?

In immune regulation, our bodies rely on two major mechanisms to prevent the development of potentially harmful immune cells. In most diseases, autoantibodies (produced by B lymphocytes) or autoreactive T lymphocytes are primarily responsible. The first immune mechanism, termed central tolerance, begins in the primary lymphoid organs. For B lymphocytes, immature B cells in the bone marrow whose B cell receptors (BCRs) recognize self-antigen are typically negatively selected by either clonal deletion, receptor editing, or they enter a state of anergy. However, T cells begin their maturation in the thymus where T cells found to bind host proteins or cells receive apoptosis signals, and those T cells that do not recognize potentially harmful peptides are allowed to enter the periphery and mature.

Yet, this mechanism is not perfect. Peripheral tolerance, as its name suggests, occurs in the immune periphery where mechanisms are in place to remove any weakly self-reactive B and T cells that escaped central tolerance. While B cell peripheral tolerance has not been fully characterized, it is understood the autoreactive T cells in the periphery can be subject to either clonal deletion, conversion to a regulatory T cell, or induction to an anergic state (similarly to B cells). 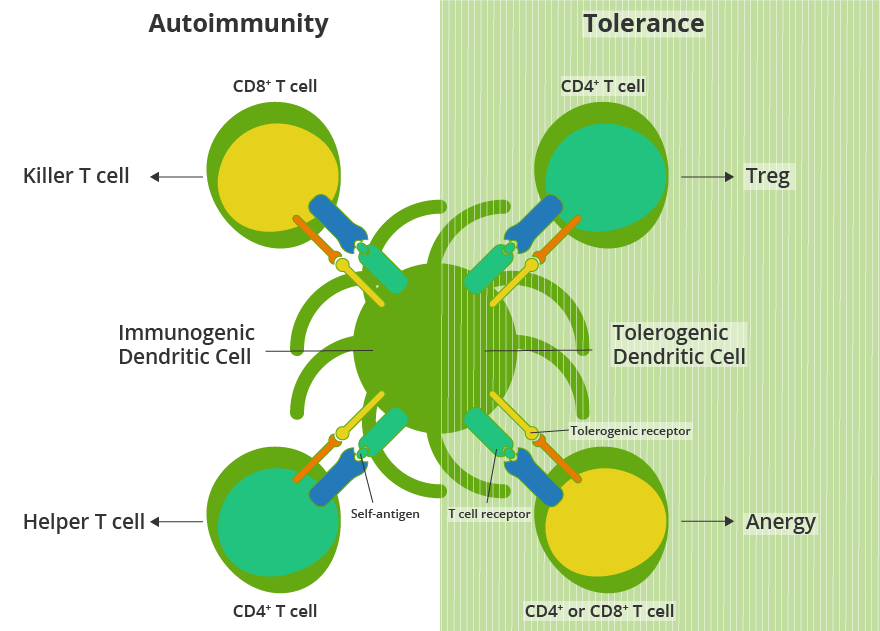 Despite these intricate regulatory systems to prevent autoimmune cells from surviving, autoantibodies and self-reactive T cells can be detected in the general population, even in the absence of autoimmune disease. These self-targeting cells must cause pathological or physical damage to tissues and/or organs. Therefore, it is currently understood that individuals who develop the disease have had breaches of either the central or peripheral tolerance mechanisms.

How is autoimmunity detected?

Autoantibodies have been the traditional biomarker for autoimmune conditions to date. This is due in part to the ease of conducting antibody tests in clinical settings compared with T cell assays. The most common antibody test, the anti-nuclear antibody (ANA) test, can test for antibodies in an individual’s serum sample against antigens in the nucleus of human epithelial cells (HEp-2 cells). There are a variety of methods that can be utilized to visualize autoreactive antibodies, including:

Levels of autoantibodies can indicate disease progression but often individuals with autoimmune disease present without any positive antibody tests but develop detectable serum antibodies as time goes on. Depending on the disorder, diagnostics may include looking for one single antibody or a combination of multiple antibodies.

Biorbyt has a wide range of Immunology and Apoptosis related products.

What treatments are available?

The two leading treatments available consist of dampening the immune system using either non-steroidal anti-inflammatory drugs (NSAIDs) or immunosuppressives. However, these are not cures. With more than 80 autoimmune conditions, scientists are focusing efforts on understanding the underlying causes of disease and disease progression, as well as investigating new methodologies for treatments and therapies. Advances in gene therapies, stem cell-based treatments, and even transplantation are all promising leads in the search for solutions to the burden of autoimmune disease.

Immune dysregulation can lead to autoimmune diseases, despite the careful mechanisms in place to prevent their occurrence. Autoimmunity can be brought on through a variety of causes and can manifest in a multitude of ways that make their diagnoses complex for clinicians. Scientists are still investigating the underlying reasons for loss of immune tolerance and how to combat disease progression or even intervene before the disease has an opportunity to occur.

Application Notes
We use cookies to provide you with a better service. Carry on browsing if you're happy with this, or find out how to manage cookies